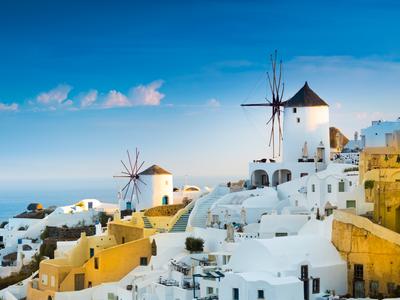 On board Sky Express flights, cabin baggage should not exceed 55x40x23cm. If your hand luggage is bigger, the Sky Express assistance team will most likely ask you to pay extra for checked luggage.

Where does Sky Express fly to?

Sky Express offers direct flights to 46 cities in 8 different countries. Athens, Thera, and Thessaloniki are the most popular cities covered by Sky Express.

What is Sky Express’ primary hub?

Sky Express concentrates most of its flight operations in Athens.

How does KAYAK find such low prices on Sky Express flights?

KAYAK is a travel search engine, meaning that we continuously look across the web to find the best deals for our users. With over 2 billion flight queries processed yearly, we are able to display a variety of prices and options on flights from all airlines, including Sky Express.

Offering entirely domestic flights within Greece, Sky Express has become a major transport link within the Mediterranean country. Services are available to more than 30 destinations across Greece, including to a number of isolated islands such as Skyros, Zakynthos, Menos, Kos, and Astypalaia. The airline uses a primary base in Athens and a secondary hub in Heraklion to operate these flights.

Sky Express was founded in 2005 and has steadily developed a network of routes since. A codeshare agreement is in place with Blue Air, which provides customers more flexibility for services within Greece. The airline also has a partnership with Air France and KLM, aimed at improving the connectivity of Amsterdam, Paris and the Greek islands. There is a codeshare agreement with Berlin-based carrier Germania that delivers smoother links between Athens, Bremen and Nuremberg. These associations have led to a wider spread of European customers flying with the Greek airline.

An entirely turboprop fleet of aircraft is used. The propeller-powered airliners are ideal for short distance flights, with Sky Express choosing to operate both ATR and British Aerospace manufactured planes. The aircraft are able to carry between approximately 32 and 70 passengers. The ATR 42 model is one of the most commonly flown, distinguished by two six-bladed propellers and a short body.

All passengers are seated within the singular Economy cabin, meaning there is no class separation. However, fare options are offered, providing different baggage allowances and boarding priority. The SkyBasicPlus fare offers access to an executive lounge as well as flexibility should you need to change your flight.