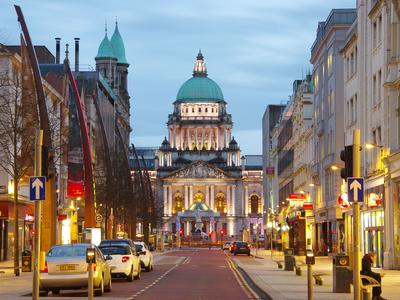 How long is the flight to Northern Ireland?

An average direct flight from India to Northern Ireland takes 27h 10m, covering a distance of 7986 km. The most popular route is Bengaluru - Belfast with an average flight time of 38h 50m.

What is the cheapest flight to Northern Ireland?

What is the most popular destination in Northern Ireland?

Based on KAYAK flight searches, the most popular destination is Belfast (100% of total searches to Northern Ireland).

Cons: "Rude check in lady who said I needed to check bag (but didn’t. Loads of space)"

Pros: "Boarded and left on time"
Cons: "Food was awful. It was so hot I was fanning myself. I had a 11 hour flight and than a 10 hour flight after both British airways, and the same exact food. So I just went hungry. I smelled something amazing so thought I would get a good hot meal as my last meal since I had not had anything in 9hours, but nope, just got a measly cold sandwich. I won’t book British airlines again for international travel, I’ll stick to emirates."

Pros: "It's like Air India the crew is old and cant serve the aircraft. Nothing I liked. Flight was very old. Waste if money."
Cons: "Change the aircraft. Give us new aircraft or at least inform passengers this is old aircraft so we don't book. Premium economy price was very high. No service. Entertainment tv 4inc which doesn't work. Seats uncomfortable. It's better to travel will Emirates.i have no words why did I travel in BA."

Cons: "Loved the flight however wished the food selection was better in business call. On the way to Mumbai the option and choice was better and tasted good. I was not impressed with selection and taste it could have been better."

Pros: "As always no issues at all, I reserved my seats early to get extra leg room which is always great. Fast boarding and a quick flight, having been on a long haul flight a few hours before I needed this to get home."

Pros: "We could reschedule it. But only a week later."

Pros: "Nothing"
Cons: "Entertainment and food were terrible. Plane was filthy and ancient. Crew was inattentive and we were treated poorly for bringing a child’s seat on the plane. It was hot the entire 9 hour flight. I will pay extra not to fly BA again."

Cons: "Left standing 30 minutes during boarding process. All food and drink for sale only. Even a glass of water. No entertainment. Seat barely large enough for small person. No immigration cards available on the flight."

Pros: "Quick"
Cons: "Nothing. The flight was quick and boarding was easy"

Pros: "The food and the services. The plane looks new and clean. Many new release movies."
Cons: "seat space is too small and not comfort."

Pros: "Highlight of the trip was BA's inflight safety video."
Cons: "I took a BA flight after a while. I had stopped flying BA in flight service and comfort was poor. I travel business class. Seats were dated (seat cushions), plane was dated, inflight entertainment systems dated (compared to most other airlines). Crew goofed up on food. I had a seat change which I informed the Sr Purser who came to take food order, his colleague who came to serve drinks. Still the server gave my food to the other passenger who had requested to change seats. Which resulted in no food for me. They clamoured some meal fro economy class and served so shabbily (only a pic can show how shabby it was - unfortunately I can't attach one here). In spite of all this the purser showed no remorse or offered no apology. I think I made a mistake in choosing BA, should have never come back to them."

Pros: "Flight was onetime, food on the flight was for purchase but it was vert nice, boarding was onetime and smooth."

Pros: "Everything was okay, except....."
Cons: "I was not happy with the ground staff in Mumbai, for not sending my baggage directly to Toronto, which was my last stop. I had to go through the whole process of checking in again in Montreal, where I could have missed my connecting flight to Toronto. I think your BA staff in Mumbai should be trained better, thanks."

Pros: "Economy plus was great. Economy was a little rough for me as seating was much less comfortable"

Pros: "I like that they upgraded the seat. My other flights, however, were garbage. This particular one was pleasant."
Cons: "Dude with stank breath constantly burping in my direction. Not your fault, I know."

Pros: "The room on plane to Heathrow, wouldn’t know about way back considering I had to rebook onto Air India..."
Cons: "Just the fact that BA decided to hold us in UK for 6 hours to get their full pay and the fact that Heathrow ground crew had not enough de icing equipment and resources were at an all time poor response. Three hour lines for checking on status of bags, status of flights, unable to book a hotel through BA and got nothing from them. I didn’t enjoy freezing and staying there in Heathrow freezing... plus I didn’t fly this flight home due to fears of them not being able to handle a coating of snow versus what loads of snow we recieve in the states. I had to take Air India home to the US AND HATED IT... thank you BA and especially Heathrow Number one for lack of response and total irresponsibility..."

Pros: "It was only a 90 minute flight"
Cons: "I paid for the exit row and did not get it. Originally I paid for 10B and 10C which were on the exit row on the seating chart. They then cancelled my seats so I had to go back online and pick again. They wanted to charge me again so I called BA and got seats 10D and 10E which were also supposed to be exit row seats. They even asked me if my wife and I were physically able to follow flight crew instructions for the exit row. When we boarded we found out 10D and 10E were now the row in front of the exit row which did not recline. After being packed like sardines on the flight from Philly to London I was looking forward to some legroom. It could not have been any worse."

Cons: "The food was served twice on the flight, but was almost the same kind of menu."

Pros: "Punctuality"
Cons: "Mediocre aircraft, dismissive crew. Nothing surprising from BA to be quite honest I shall continue to lower my expectations."

Cons: "Wait for shower was more than one hour - really do you expect people with 10 hours to cone to lounge Food was minimal for breakfast and should take cue from their boston lounge"

Cons: "Has taken up mobility/special assistance while bookkong but didn't get any assistance after landing at London Heathrow airport. Entire transfer at Heathrow airport for catching up next flight to Phoenix, USA lot of struggle had done because of it."

Pros: "Flight was fine but even allowing over 2 hours, almost didn't make it to board on time"

Pros: "I liked the movies and the entertainments on the plane."
Cons: "People like old when it comes to history, traditions, restaurants etc. But when it comes to travel and technology people don't. Two of my friend's entertainment monitors were broken, bugs with the program all the time, no wifi on board. Compared to other airlines BA was quite disappointing."

Pros: "Did a good job of being attentive to passengers"

Pros: "Staff was very professional and courteous. No much waiting time for check in. Separate area for security clearance for British Airways passengers was very helpful and noteworthy."
Cons: "Carry on baggage at Mumbai Airport shown different dimensions than traveling from London. No proper communications for delayed flight and boarding was not organized. In flight food from Mumbai - London route was very much unsatisfactory."

Pros: "Service onboard is always pleasant."
Cons: "Not a fan of British Airways business seats. It feels narrow, crowded (i counted 8 people per row?) and not private. You get much better seats on other airlines without having to pay first prices. Boarding was confusing for people that don't know that Club World means business. And food was bland."

Pros: "The staff were prompt is serving food and drinks, good selection of movies on board."
Cons: "Other passengers weren't the best, and unfortunately there were many small children on the plane, which meant it was very noisy."

Cons: "airfare.com is truly awful, and I'll avoid using that service in future"

Pros: "We waited for 45 minutes for the line to mover at all. She kept claiming that the people at the front of the line had a big problem but without getting any help or moving us to another line. When we got to the front we could see what her problem was. .she scanned the same passport 3 times. Could not do anything right."

Cons: "British Airways lost our luggage between London, Heathrow and Barcelona. Thus, my wife and I were without 80% of our luggage for a 10 day period which included a cruise. The incompetency did not end there... the lack of service was the worst part."

Masks required on board, masks provided on flights to Northern Ireland

Middle seats unavailable to book on flights to Northern Ireland

Testing for antibodies, testing for symptoms for flights to Northern Ireland